Ticks can carry Borrelia, a bacteria that can cause Lyme Disease in humans, so after spending time outdoors make sure you check for tick bites; and don’t let these Lyme disease symptoms go unquestioned. If a tick bites you, this article has everything you need to know and do for your best chance of being safe.

You might be shocked how many people get bitten by ticks each year but you’ll never find out, most of them won’t report it. You might also be surprised how many people get Lyme disease but the diagnosed cases are just part of the story. It is estimated that 300,000 people are affected each year in the US and 65,000 in Europe. It seems to me that most Lyme will not get diagnosed, or will be diagnosed as something else (see below).

Let’s start with the beast that causes it all, a tiny 100 million year old spider like creature…

What is a tick?

A tick is an arachnid, it has 8 legs. Spiders, scorpions and mites are also members of the arachnid family.

Ticks crawl around and as an ‘ectoparasite’ (external parasite) they feed on the blood of mammals and birds. There are over 20 species of ticks in the UK and US, many more worldwide.

The tick had evolved by the Cretaceous period. A 100 million year old fossil of a tick shows it was pretty much as it is now back then. ‘We’ weren’t even apes back then.

How long does a tick live? – The life-cycle

Ticks start life as an egg then hatch into the larva stage. They are tiny, so small you could mistake them for a grain of sand, until they start crawling! The next stage is nymph before they become an adult. Ticks live for about 2 years and feed once during each stage.

They’ll wait at the top of a blade of grass, cresting, their front legs pointing outwards, the claws waiting to latch onto something that smells tasty – they can sense the carbon dioxide mammals give off. They feed for 3-7 days then just fall off, fat, engorged. Then they chill and grow into adults when they’ll be a few millimeters long.

How do ticks affect humans?

Firstly, they bite. They’ll find a nice warm place out of the way, like your crotch and burrow their mouth parts into skin to get to your blood. They have barbs on their jaws which anchor them to their host, this is why they are so hard to remove. This is also why we must be careful when removing.

A tick bite can get infected so it must be treated with a disinfectant.

Most importantly, a tick can spread disease. Ticks can carry many diseases and transmit them to us when they bite us. Some have said that it takes 3 days from when they bite to transmission but this is NOT the case, it can be much sooner.

How do I know if I got bit by a tick?

Ticks feed on our blood, when they’re full they drop off, this is generally thought to be about 3 days.

If you have been bitten by a tick and it has dropped off you may just about see a mark but you’re not to know even that it was a bite let alone identify it as a tick bite. If you see a red ring or patch around the bite then read on…

What to do if you are bitten by a tick.

If you are bitten by a tick you must remove it properly as described. Clean the wound with soapy water then apply a mild disinfectant or antibiotic cream, this will not kill any disease but will stop the wound from getting infected.

Ticks are so small that you probably won’t feel a bite and it won’t usually itch, unless you have an allergic reaction to the saliva.

How do I remove a tick?

A tick’s jaws are barbed and the tick is well anchored to it’s host. They are really hard to get off.

Some say to put Vaseline on a tick to suffocate it into letting go or burning it with a match head. If this makes the tick sick then it’s just more likely to transmit disease to you.

Don’t crush the tick. If you pull a tick off quickly it’s head can be left behind! Gross right? You should pull a tick gently, encouraging it to let go.

Pull it with tweezers or another proper tick removing device. I would say don’t twist the tick, I imagine this would only increase the chances of leaving part of it behind.

I have a set of Lifesystems tick tweezers in my van and a set in my first aid kit, and I’ve used them a fair few times. When you find a tick and you don’t have tweezers, you really wish you’d spent a few quid months ago – trust me, I know how it feels! 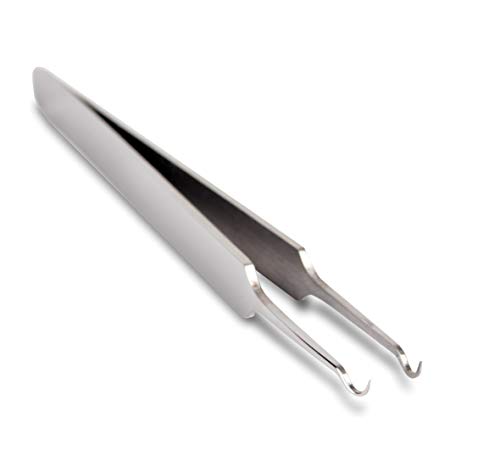 What is Lyme Disease?

Lyme disease (borreliosis) is a bacterial infection caused by Borrelia. Borrelia is a germ, a bacteria, a pathogen which can reside in a tick’s mid-gut. When the tick feeds it can transmit the bacteria into it’s host.

Lyme can be a debilitating disease with over 70 symptoms (see below).

Lyme disease was diagnosed as a separate condition in 1975 in Old Lyme, Connecticut.

What are the symptoms of Lyme Disease?

A red rash, a ‘bullseye’ (known as an EM or erythema migrans) or blotch around a tick bite is a good indicator that the borrelia bacteria has been transmitted from the tick. It’s said to be rare that this happens but I’ve been told by many people of debilitating illnesses after a tick bite and this should not be brushed aside. The EM is not always present.

There are many bacterial diseases such as Babesiosis, Anaplasmosis and Rickettsiosis but Lyme borreliosis is by far the most common in the UK.

Here are some later symptoms of Lyme disease:

Note: Some people have an allergy to tick saliva, this obviously can cause a rash and other symptoms. You can even develop an allergy to red meat getting something called Alpha-Gal from the lonestar tick.

Can I get diagnosed and treated for Lyme Disease?

Being diagnosed with Lyme can be tricky. The two most common tests are ‘Western Blot’ and ‘ELISA’. People have told me that their doctor has tested them a number of times with a negative result, one test might pick it up whilst another won’t.

‘The definition of insanity is doing the same thing over and over and expecting different results.’ – You need a doctor who’s interested.

Lyme disease can be cured by taking antibiotics, however, Borrelia is a very sophisticated bacteria, it can even take proteins from white blood cells and attach them to itself to fool us into missing it! Borrelia can even curl up (in a cystic form), evading detection, fight off attack and survive for up to 4 weeks. What does this mean?

If you take a course of antibiotics for 2 weeks it may not kill borrelia and your Lyme disease will live on!

After taking antibiotics, you should always follow up with probiotics to restore your gut flora.

Don’t get excited. These natural remedies will only relieve the symptoms of Lyme disease.

Some non-prescriptive treatments can be used to improve the immune system and attack bacteria. I read of one claim that stevia kills lyme disease!

I’ll just list them though instead of going into how they work:

There is some evidence that CBD oil can at least relieve the symptoms of Lyme disease.

I personally take CBD oil for help with CFS, fits and anxiety. Because it’s legal in the UK to buy it (the THC is taken out), lots of people are now using it to help with autoimmune disease symptoms.

(I’ll be publishing an article on CBD oil soon so make sure you’re subscribed and you’ll be notified.)

What can I do to stop ticks biting me?

Here are some handy tips to follow to avoid tick bites:

DEET product I use and know work

Here are a couple of products that might help you avoid getting bitten. Spray on to clothing and camping equipment, especially around your tent door and net or your hammock bug net. The DEET or Permethrin in the product kills ticks if they crawl onto a treated area.

You can do this at home as it is effective on clothing for up to 6 washes.

Some comments from members on my ‘Ultralight Backpacking’ and ‘214 – Walking The Wainwrights’ groups:

‘I got Lyme a few years ago on my very first backpacking trip. Easily the sickest I’ve ever been in my life.’

‘It’s not just Lyme disease you get from ticks. I had a disease called Erlychiosous that was caused by a tick bite. I’m talking 104 degree fevers.’

‘I’ve had lyme maybe 4 times (been treated at least 6). I had no rash, no lyme disease symptoms other than in the blood test. Basically now, I treat everything with permethrin and try to check for ticks more frequently.’

‘I got very sick and was diagnosed with late-onset Lyme disease (9 months after my hike). I couldn’t walk for a month.’

‘Spray permethrin on your clothes, tent, and backpack, and deet or picaridin on your skin and you should be good to go.’

I might also say that you could bath in peppermint and teatree, you won’t taste very nice.

I include a short talk on ticks and Lyme disease at the beginning of all my Navigation Workshops, Wild Camping Workshops and group walks.

If you’ve had Lyme disease or have been bitten by a tick please share your experience with us in the comments below, it would be much appreciated.

Should you have any Lyme disease symptoms go to the doctors straight away and don’t give in if they try to brush you off.

I hope you never really need this information. If you have any questions or comments please feel free to comment below

This website uses cookies to improve your experience while you navigate through the website. Out of these cookies, the cookies that are categorized as necessary are stored on your browser as they are essential for the working of basic functionalities of the website. We also use third-party cookies that help us analyze and understand how you use this website. These cookies will be stored in your browser only with your consent. You also have the option to opt-out of these cookies. But opting out of some of these cookies may have an effect on your browsing experience.
Necessary Always Enabled
Necessary cookies are absolutely essential for the website to function properly. This category only includes cookies that ensures basic functionalities and security features of the website. These cookies do not store any personal information.
Non-necessary
Any cookies that may not be particularly necessary for the website to function and is used specifically to collect user personal data via analytics, ads, other embedded contents are termed as non-necessary cookies. It is mandatory to procure user consent prior to running these cookies on your website.
SAVE & ACCEPT